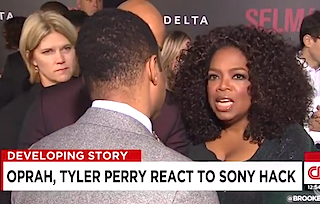 CNN’s Don Lemon caught up with Oprah Winfrey at the New York City premiere of the film Selma last night, and he asked her to weigh in on some of the more damning comments that have emerged from the hacked emails of Sony Pictures executives. The media mogul warned the public against judging those involved based on comments that were never intended to be made public.

“I would hope that we would not stand in judgement, in such harsh judgement, of a moment in time where somebody was hacked and their private conservations were put before the world,” Winfrey said. While she said that she tries to write emails “as though they’re going to show up in The New York Times, Winfrey added, “There are things that you say in your private conversations, with your friends, with your colleagues, that you would not want to be broadcast on CNN.”

Winfrey was responding to an email conversation between Sony co-chair Amy Pascal and producer Scott Rudin in which they joked about the movies President Barack Obama might like, such as Django Unchained, 12 Years a Slave and others starring black actors.

Similarly, producer/director Tyler Perry told Lemon that “we all make stupid mistakes” but he “absolutely” does not believe that Pascal is “racist.”