Orange You Glad I Didn’t Say Pelosi? John Boehner Will Take The Gavel

Orange You Glad I Didn’t Say Pelosi? John Boehner Will Take The Gavel 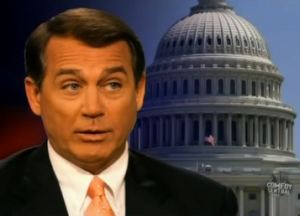 It’s a historic night — not only did the House of Representatives flip from Democrats to Republicans by the largest margin since 1948, but, as NBC’s Brian Williams succinctly put it last night, Pelosi just became “the first female ex-speaker of the House.”

On Morning Joe this morning, John Heilmann suggested that Pelosi was the victim of her own effectiveness in keeping the House Democrats hewn close to the Obama agenda, which did not apply to the Senate: “The Senate did not get tarred with the Obama agenda the way the House did.” That may be the kind of fine distinction that voters don’t tend to make, but the fact is, “Pelosi” and “Obama agenda” tend to be phrases that go together, peas and carrots-style, across the media.

Either way, it’s Boehner’s turn now — and he’s hit the reset button with an earnest, emotional speech that has set him up as a leader with stars in his eyes about where the country can go, and left memories of ants and nuclear weapons, once seen as so damning, in the distant background.

Meanwhile, Twitter lit up with the news under the #TCOT hashtag (“Top Conservatives On Twitter”) — shortly after the news broke that the House would swing to the GOP, I did a search on Twitter for “Pelosi” and the overwhelming number of responses were #TCOT tweets. Many of them expressed excitement that she’d be out and Boehner and the GOP would be in (Per @AlinskyDefeater: “The four sweetest words in the English language – No more Speaker Pelosi.”, but there was an unsettlingly high number of them comparing her to a witch. Boehner may get orange jokes (and come ON, those are funny) but comparing powerful women to evil witches always feels a tad — what’s that word? — ah right: sexist. Here’s a classy sample: @FakeBenWatson: “Ding dong, the witch is dead. Which old Witch? The Nancy witch! Ding Dong, Pelosi witch is dead!!!” and also this: @OldBroad_Ohio: “She’ll just dust off her broom RT @LaurieBailey: Does this mean Nancy Pelosi is going to have to fly coach? #tcot #teaparty” and also this @singingherpes: “BREAKING: After finding out that she lost the House, Pelosi threatens to commit suicide by pouring water on herself. #tcot #teaparty #ocra“. Keep it classy, singingherpes.

The Daily Show, as always, had a great take on Boehner’s ascension: