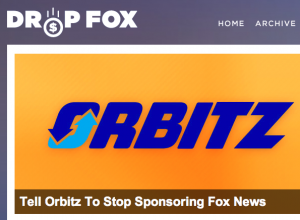 The effort by liberal media watchdog group Media Matters to convince half a dozen leading national advertisers to pull their dollars from the Fox News Channel got a high-profile snub Thursday when Orbitz, the travel company, not only declined to participate, but fired back at Media Matters, calling the “Drop Fox” campaign a “smear effort.”

According to the Drop Fox website, Orbitz is one of seven key advertisers targeted, including Best Western, Priceline, Delta Airlines, Ocean Spray, Netflix and Southwest Airlines. The campaign suggests viewers sign a petition asking the advertisers to pull spending from Fox News for being “a political operation masquerading as a news network,” advancing “anti-LGBT bigotry,” (including a letter signed by Courage Campaign, GLAAD and Equality Matters sent to Orbitz, a company described by the groups as progressive in its support for LGBT issues) and “misinformation about climate science.” The campaign argues that advertising on Fox associates brands with this “misinformation”:

Fox’s record, as evidenced by the examples listed in the below indexes, raises two questions:

Given Fox News’ history of deplorable or irresponsible conduct, why would any respectable advertiser sponsor Fox in the first place?
Why would an advertiser want to risk being connected to Fox News when the next inevitable firestorm over Fox’s conduct erupts?

But Orbitz shot back, describing Media Matters as “a political organization that has been funded pretty extensively to go after one network, and we aren’t going to engage in that fight,” Orbitz spokesman Brian Hoyt told The Hollywood Reporter:

“We have a strict policy of tolerance and non-discrimination, and that means we don’t favor one political side over another. Tolerance is a two-way street,” he said. “We’re going to advertise on conservative TV stations, liberal TV stations and — if there are any out there — unbiased news broadcasts.”