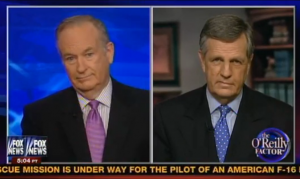 Bill O’Reilly kicked off his week with a look back at the joint interview President Obama and Secretary of State Hillary Clinton gave to 60 Minutes‘ Steve Kroft. The “softball” interview provided us with no new information, O’Reilly said, particularly focusing in on the attack on Benghazi. But Americans simply don’t seem to care about the issue.

When asking about Benghazi, O’Reilly wondered why Kroft didn’t question Obama about not sending Clinton to appear on Sunday shows. Furthermore, he asked, why did he send UN Ambassador Susan Rice who clearly didn’t know enough about the situation? All we learned, he said, is that “the world is a dangerous and complicated place” (in case you weren’t already aware).

In the end, however, it was good PR for the pair, a “big win” — because the truth is that most national media don’t care about Libya, and the issue hasn’t “engaged” American citizens either. The media in fact “adores” them. Simply put: Obama and Clinton won’t be forthcoming on the issue, and we can’t make them.

Brit Hume joined O’Reilly to discuss the interview, reiterating his opinion that Clinton hasn’t been a “great” Secretary of State, as many have described her to be. Yes, she’s worked hard — and done so with “dignity” and “grace” — but the “list of achievements that can be attributed to her is not long and is not major.” Look around for a “Clinton doctrine,” Hume said, and you find none.

Both O’Reilly and Hume agreed that Kroft conducted a “softball” interview. But Kroft is “in good company,” Hume said — since Obama’s had no shortage of easy interviews.