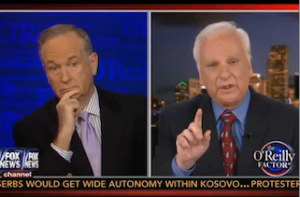 Bill O’Reilly was apparently inspired by David Carr’s New York Times column “excoriating” CNN for its Boston Marathon bombing errors and invited Fox contributor Bernie Goldberg to share his thoughts on the matter. Rather than take the opportunity to go after rival CNN, O’Reilly and Goldberg defended the network for its “honest mistakes.”

Goldberg made the point that while there were definitely some flat-out wrong scoops on CNN and elsewhere last week, “not one reporter at CNN or Fox or any place else concocted these supposed facts. Not one reporter made stuff up in order to be a hero and get on the air with an exclusive.” He explained, “every single piece of misinformation came from supposedly credible sources in law enforcement.” The only problem was, the sources were not “credible.”

If anyone is to blame, the two men decided, it’s the unnamed sources was provided the false information to reporters. Speaking specifically about CNN’s John King, who took the brunt of the criticism by announcing that police had arrested a “dark-skinned” suspect long before the real suspects were identified, O’Reilly said he should have outed his source, thereby shifting the blame off of himself. “If I were King and somebody burned me on the story, I would say here’s who burned me.”

Finally, O’Reilly had Goldberg weigh in on his criticism of Tom Brokaw from earlier in the program. While Goldberg thought perhaps O’Reilly was being a little too hard on Brokaw, he did agree in some respects. “There is an implication here that if we didn’t use drones then maybe they wouldn’t hate us as much,” he said. “But, you know, we never used drones before 9/11, 2001, and they attacked us then.”