O’Reilly And Bernie Goldberg Spend Segment Gushing Over Sen. Rubio: ‘He Is The Future’ 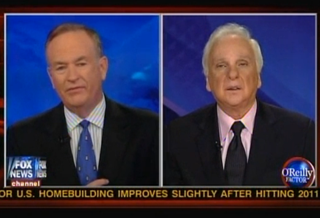 Though it’s detractors say otherwise, The O’Reilly Factor is not typically a place in which a politician escapes a full segment without receiving at least a jab or two, but tonight, Sen. Marco Rubio achieved just that. In analyzing his performance in a debate with CBS’ Bob Schieffer, both Bill O’Reilly and guest Bernie Goldberg were very impressed with how he “destroyed” Schieffer– so much so they both mused he was practically a shoo-in for the 2012 Republican ticket.

The clip of Sen. Rubio shooting down Schieffer’s claim that the debt was a Bush administration relic proved to Goldberg that a narrative has arisen on the left: “Barack Obama is the reasonable one– he is the one who is responsible fiscally… the GOP, on the other hand, are not responsible and the only two words they know are ‘no taxes.'” Goldberg argued that, while it had just hit the media, it wasn’t originally created there– “Barack Obama painted that picture of himself.” Not all was rosy from Goldberg about the Republicans, however– he argued that “they are coming across as intransigent” and had “hurt themselves in this” with their public rhetoric, concluding that Republicans were likely to “lose the PR war.”

O’Reilly agreed, but made one exception: Sen. Rubio. “Rubio was able to– and he was the only Republican I’ve seen lately– he was about to take the leading questions the media was formulating… and destroy them.” He noted that Sen. Rubio was among he few to make the point that “the President waiting until the last moment, and now we’re facing Armageddon.” He then concluded that the exchange with Schieffer was precisely why “he will be the Vice Presidential nominee”– that, and of course, “because he is Hispanic– he’s Cuban.” Goldberg put up not resistance: “I would put him on the ticket if he were from Guam!” Goldberg exclaimed that “he is the future,” and Republicans should take note, ending the segment with no conflict between guest and host.