O’Reilly And Kirsten Powers Clash With GOP Guest Over Iraq: ‘You Can’t Have Influence On People Who Hate You’ 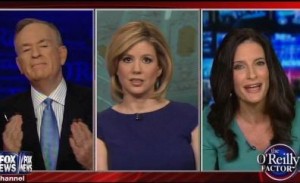 Bill O’Reilly opened his show tonight reflecting on the 10th anniversary of the Iraq War, acknowledging that while he supported it when he believed Sadaam Hussein had weapons of mass destruction, he remains convinced that there were better ways the U.S. could have gone about carrying out the mission. When he brought on Kirsten Powers and Kate Obenshain to weigh in, O’Reilly said that the government needs to decide for future conflicts if it is worth spending so much “blood and treasure” fighting a war to bring democracy to a nation like Iraq, adding that it was difficult for the U.S. to influence events in Iraq because “you can’t have influence on people who hate you.”

O’Reilly said in his Talking Points Memo that for better or worse, the Iraq War has forever changed the United States, mentioning a current “ideological battle over how to deal with villains like Iran.” He acknowledged that it is becoming more clear that the U.S. cannot simply go into nations like Iraq and Afghanistan and impose democracy if they do not desire it in the first place. O’Reilly declared, “We cannot wage war for any other reason than to protect the homeland.”

Powers told O’Reilly she opposed the war from the very beginning, to which O’Reilly brought up a clip of Hillary Clinton laying out the case of why Hussein was an imminent threat to the United States. Powers explained that looking back, there was not a lot of evidence in what Clinton said, noting her support for the Iraq war lost Powers’ vote in the 2008 Democratic primary. Powers said it was just “absurd” to link Hussein to al-Qaeda because it “didn’t make any sense” at the time.

Obenshain shot back that Hussein supported terrorist organizations, and bemoaned how instead of staying in Iraq to make sure the U.S. has a reliable ally in the region, Obama “couldn’t stick it out.”

O’Reilly clashed with Obenshain about the end result of continued occupation, telling her that the United States cannot simply send men and women serving in the military overseas on a “hope” that things will turn out for the better and the U.S. will be able to exert some influence in the region. O’Reilly said, “You can’t have influence on people who hate you.”