O’Reilly And Krauthammer Debate: Is Obama The Problem? Or Is It ‘We The People?’
VIDEO

O’Reilly And Krauthammer Debate: Is Obama The Problem? Or Is It ‘We The People?’ 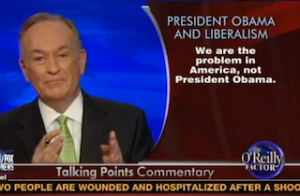 Echoing the refrain of yesterday’s inaugural address, Bill O’Reilly‘s “Talking Points Memo” segment tonight asserted that “We the people” are the real problem in America today, not President Obama.

While he spent the opening of his show last night critiquing Obama’s speech, tonight O’Reilly turned his attention to the American people, who he says need to decide “whether we want a market-based economy or allow the federal government to control commerce.” O’Reilly finds it hard to fathom “why so many Americans are accepting President Obama’s vision when less than 30 years ago President Reagan was the political icon.”

Returning to the Romney campaign refrain of “You Didn’t Build That,” O’Reilly used himself as an example of why Reagan’s more overtly market-driven approach was superior to Obama’s focus on “social justice.” “President Obama told me that I did not build The Factor,” O’Reilly explained, “and that the government is somehow partially responsible for my success.”

O’Reilly admits that he gets to work by driving on the Long Island Expressway, but since “that road is a mess,” he won’t admit that the government is helping him succeed at his job.

All of this leads to the conclusion that “the struggle in America right now isn’t between Republicans and Democrats. It’s between us: we, the people. You either want freedom or you don’t.”

Charles Krauthammer joined O’Reilly to discuss these issues in light of Inauguration Day. He essentially disagreed with O’Reilly’s thesis “that we get the government we deserve, and that Obama reflects a change political ideology of the country.”

Krauthammer arrived at this view because “Obama did not have a opponent who presented a clear and strong argument for a Reaganite perspective of stronger government, less taxes, less dependency.” Therefore “we the people” did not get an opportunity vote in a candidate with truly conservative values. He mentioned both Paul Ryan and Marco Rubio as the type of candidates who could carry that mantle for Republicans in 2016.

However, Krauthammer concluded, “I will say that if liberals keep winning elections, then your theory of a fundamental change in the change of the electorate and the sense of dependency at which point it becomes a point of no return would be right.”

O’Reilly was ultimately dissatisfied with this outlook, lamenting why the Tea Party energy of 2010 seemed to “evaporate so quickly” in 2012. “That’s on the folks, is it not?”

Perhaps, as we enter President Obama’s second term, O’Reilly is sick of slamming the president night after night and is ready for his conservative base to rise up again.