O’Reilly And Krauthammer Send Off Barney Frank: ‘The Face Of The Failure Of American Liberalism’
video

O’Reilly And Krauthammer Send Off Barney Frank: ‘The Face Of The Failure Of American Liberalism’ 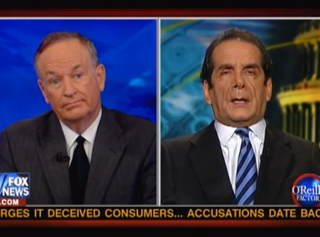 Bill O’Reilly did not spend much time on Rep. Barney Frank‘s retirement yesterday, but seemed to hold his strongest opinions for tonight, when he shared a segment with Charles Krauthammer on the Congressman’s legacy in Congress. While O’Reilly focused on Rep. Frank being “dishonest,” Krauthammer lamented his “self-righteousness” and proclaimed him “the face of the failure of American liberalism.”

RELATED: Barney Frank To Announce He Will Not Seek Re-Election To Congress

“He had a long run, and it’s good that it’s over,” Krauthammer said of Rep. Frank’s career, considering him “the face of the failure of American liberalism” but noting that he would most be remembered as “the man who protected Fannie and Freddie at a crucial time.” He also criticized his attitude as a Congressman, that if someone didn’t agree with him, “you don’t care about the poor, you’re a bad person like all of the conservative movement and, therefore, you are almost out of bounds in terms of moral arguments.”

O’Reilly asked Krauthammer whether he considered Rep. Frank to be “honest,” which he hesitated to answer because, if one is to judge politicians for being honest, “you’d have to flunk them all.” O’Reilly then answered the question himself by calling Rep. Frank “delusional” and dishonest for his last appearance on the O’Reilly Factor.

Krauthammer returned to the point that Rep. Frank was exemplary of the sort of lack of understanding that there were policy and not personal differences between the two sides of the political spectrum– “it is not a battle between two understandings of government,” and concluding that this was not a change within the left, but a “changing of the guard.”