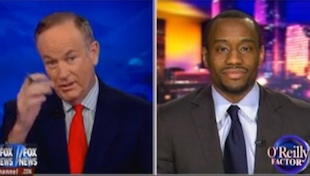 On Thursday night’s O’Reilly Factor, Fox News’ Bill O’Reilly excoriated Miami Herald writer Joy-Ann Reid for criticizing Mitt Romney over giving an impoverished black woman a wad of cash on the campaign trail. “The governor helps a woman out. The woman appreciates it very much and there you have this pinhead from the Miami Herald saying that it’s a racial stereotype.”

“Well, I don’t want to call her a pinhead,” responded guest Marc Lamont Hill. “What I will say is I slightly disagree with her. I don’t think that Mitt Romney’s decision to give her money was bad in and of itself. What else do you do? If he ignores the woman or tells her to get a job he would be blasted for being cruel to the poor as he has been for the fast few weeks. How does the story get taken up? There’s a very old narrative woven by Republicans equates poverty to race. They darken the face of poverty to make it marginal and irrelevant to people. That’s the issue and that’s how the story has been taken up and it’s also about Mitt Romney’s own history with killing jobs. I mean it’s great for him to have this largess personally as a president if he policy that does the opposite then what good is an individual act?”

“Let’s get back to the issue at hand. This person from the Miami Herald could not, could not, all right, even give credit in such a simple, charitable act because of her racial animus, I believe and political fanaticism. why else? Look, why else?” O’Reilly pressed. “I guarantee if I went to your class and explained to your class what romney did, even at Columbia University, 95% would have said just what you said, it was an act of charity and it was a good thing. Not that person! I’m getting real concerned with the level of hatred toward political candidates. it does cut both ways, there is no doubt.”

Watch via Fox News below: