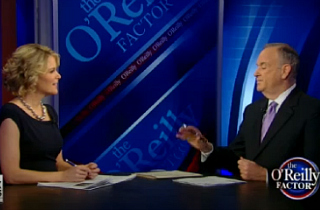 During last night’s O’Reilly Factor, host Bill O’Reilly and his guest Megyn Kelly both agreed: same-sex marriage advocates have the “more compelling” argument, whereas their opponents have not done much besides “thump the Bible.”

The revelation may come as a shock to many, as O’Reilly had previously made news for suggesting same-sex marriage would eventually lead to men wanting to marry ducks and other animals. But as he told Kelly last night, he is actually quite apathetic on the issue. “I don’t feel that strongly about it one way or the other,” he said. “I think the states should do it.”

But as they discussed why same-sex marriage has become more popular recently, Kelly suggested that once you take the biblical argument out of the discussion — because “there’s no arguing that” — the anti-same sex marriage side has a thin argument.

Referring to an interview she once conducted with Family Research Council president and anti-gay activist Tony Perkins, Kelly said that she has not heard “anything articulated that was particularly persuasive” from a non-biblical angle.

“And the other side hasn’t been able to anything but thump the Bible,” he concluded.