O’Reilly And Panel: Are Liberal Late-Night Hosts Making The GOP Primary Into A Joke? 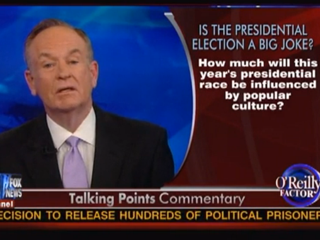 Last night’s O’Reilly Factor began with a question near and dear to the heart of anyone trying to follow the 2012 race for the White House: “is the presidential election a joke?” Bill O’Reilly did not mean it in a colloquial way, however, but in the sense that comedians and pop culture had just as much of an effect on voting than substantive issues. To that end, O’Reilly asked, how would the overwhelmingly liberal swing of the media affect the way people perceive 2012 candidates?

“There are few media personalities that have any influence anymore,” O’Reilly noted, making the point that an elite of television hosts have a great deal of control over what information the public gets, even with the internet’s diffusing influence. Ben Stein agreed with the general premise that “the audience has been more dispersed because of the internet,” but still say the thread of liberal thought in the fact that a great deal of the public “believe every word Jon Stewart says, that’s the gospel about everything.”

Columnist Linda Stasi countered that she did not believe the personal politics of the comics made a difference, given statistics showing that President Obama was the target of jokes far more often than many Republicans, but Stein did not agree, arguing that “the cool kids are all Democrats and leftists” which makes the ideology generally appealing.

O’Reilly rattled off the names of most of the network late night hosts– Jay Leno, David Letterman, Jimmy Fallon, Jimmy Kimmel— suggesting they all at least lean liberal. “Who is a conservative late night guy?” he asked Stasi, who replied that the number of jokes about President Obama was overwhelmingly higher than that of any other Republican candidate. O’Reilly insisted, however, that this did not answer the question of why there were so many on the left in the popular culture, and let Stein have the last word on the matter: “the jokes about Obama are affectionate; the jokes about Mitt are mean.”