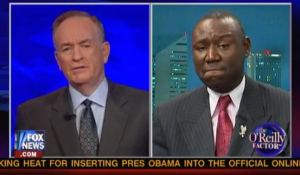 On his show Wednesday night, Bill O’Reilly returned to the Trayvon Martin case — in light of ABC News’ report that medical records support George Zimmerman‘s account of scalp injuries and a broken nose. O’Reilly emphasized — as he has in the past — that the case should not be tried on television. He brought in Martin family’s attorney, Benjamin Crump, to discuss.

Obviously, O’Reilly said, this new evidence points to a confrontation between Martin and Zimmerman. Furthermore, all the pundits who were quick to place guilt on Zimmerman, he said, are now being challenged by the medical report.

Crump agreed the case shouldn’t be tried on TV, but said the medical records should be “vetted properly.” He went on to question why Zimmerman, if he’d sustained serious injuries, would have declined medical attention following the incident. O’Reilly agreed that the prosecutor needs to cross-examine — going on to mention Martin’s autopsy, which said Martin’s knuckles were scraped. (NBC News’ report notes it was, “a small abrasion, no more than a quarter-inch in size — on his left ring finger below the knuckle.)

Without eyewitnesses, O’Reilly said, it’s very difficult to prove, beyond a reasonable doubt, second-degree murder based on racial profiling. Crump urged the need to put “everything in the full context.” There “are different versions of his account,” Crump said. “They hopefully are going to come out.” He went on to say that if Zimmerman had “stood down,” there’d have been to need for him to “stand his ground” — referring to Florida’s Stand Your Ground law, which allows acting in self-defense if there’s a reasonable belief of threat.

The two agreed on one thing: we shouldn’t be jumping to any conclusions, especially not without taking a look at all the evidence in context.