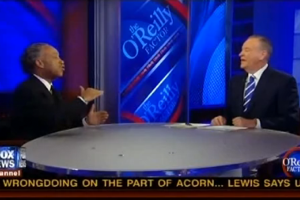 Bill O’Reilly was a guest speaker at Al Sharpton‘s National Action Network Seminar earlier this week, and, in a shocking turn of events, the people who attended a Sharpton-sponsored seminar booed O’Reilly, specifically on his point that all racism ended on 9/11. O’Reilly didn’t understand what he had done wrong, so he asked Sharpton to come on the Factor and explain.

As always, with these two, the debate was spirited, even if based in semantics. O’Reilly seemed to sincerely not understand that his statements did not note an end to the grace period of race relations that he insists he was talking about. During his speech at the lecture, he said that “the race stuff” was set aside “after 9/11”– by which he meant in the immediate aftermath, though he did not specify that he did not mean the entire expanse of time after the 9/11 attacks. Al Sharpton tried to explain to Bill O’Reilly why his argument that racism ceased to exist after 9/11 may be slightly offensive to victims of racism in the post-9/11 era, but he did not get overwhelmingly far, starting off with an unspecific mistake himself: claiming that O’Reilly was “not booed.”

It’s always fun to watch Al Sharpton interact with right-wing Fox News personalities because he never seems to get upset at them when they disagree and, like in this interview, most segments seem to end with some sort of chummy joke or genuine thanks for the airtime. It’s also interesting to note that O’Reilly’s response to not understanding the plight of underprivileged African Americans is that they also don’t understand his problems, with no trace of irony. To him it appears that all races are equal independent of historical context, a problematic point for people like Sharpton.