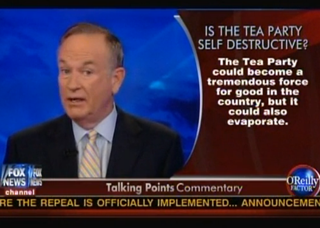 Bill O’Reilly is concerned that the Tea Party is straying onto a volatile path. O’Reilly has become one of the more moderate voices in the current debt debate, being cited by White House Press Secretary Jay Carney as such and chiding Rep. Michele Bachmann for opposing compromise. Tonight, he opened his program asking if the Tea Party was “self-destructive,” comparing them to Abbie Hoffman the radical “Yippie” movement of the 1960s.

“The Tea Party people should reassess the issue,” O’Reilly suggested, arguing that the situation is such that it necessitates compromise, even though a balanced budget would be an ideal situation for all. As it stands, O’Reilly argues that the current economic situation “could be catastrophic,” and only compromise that would prevent a default is the answer. With the Tea Party dismissing the threats, O’Reilly warned it could be perceived as radical and ignored. “Remember the Yippie movement in the 1960s?” he asked, “it blew up because it was fanatical and Americans turned away.” He suggested the same could happen to the Tea Party if they are perceived as “being unreasonable.”

“Most Americans do not like extremism in politics,” he warned, comparing the Tea Party to the Yippie movement and suggesting that its fatal error was refusing to find a healthy middle ground with opponents. “The Tea Party should be looking out for itself,” he concluded, and when conservative members of Congress like Oklahoma Sen. Tom Coburn were asserting that a compromise was integral to the health of the nation, “you have to take notice.” “We need a sane compromise and tough economic reform,” he concluded, “and I hope the Tea Party will be a part of that.