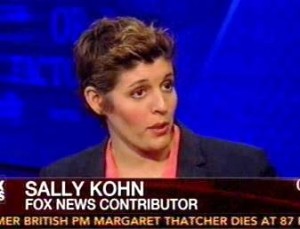 Monday night, Bill O’Reilly invited liberal Fox News contributor Sally Kohn on on The O’Reilly Factor to debate a story coming out of George Washington University that has conservatives up in arms. O’Reilly introduced the “controversy” by saying, “two students, Damian Legacy and Blake Bergen, who say they are homosexual, are demanding that the Catholic chaplain at the school be thrown off campus.” He added that the “priest in question,” Father Greg Shaffer, has “upheld Catholic Church teaching by saying that homosexual acts are sinful.”

Kohn, who herself is both openly gay and a George Washington University alum, said that she supports both the preacher’s right to say what he did and the students’ right to protest that speech. But she also acknowledged that “most of the Catholic laity and a lot of the leaders are evolving on issues of gay rights in the same way that the rest of the country is” and the students are simply reacting to that fact.

O’Reilly defended the priest, saying that he is merely promoting the current, official Catholic position. “This is the Church’s teaching that homosexual acts, as heterosexual acts outside of marriage, same thing, all right, are not approved by the church. Period.” There is no indication that Shaffer has approved homosexual acts within marriage.

When Kohn tried to question O’Reilly’s assertion that the students simply “want to throw this guy off campus,” he interrupted her, saying “we don’t have time for this B.S.” O’Reilly tried to get Kohn to pick a side in the debate, asking her to declare “yes or no” on the question of whether the school should fire Shaffer based on the students’ campaign. When she refused to give a definitive answer one way or another, O’Reilly accused her of “dodging the question.” He insisted that it’s a “fascist act to demand that a college remove a chaplain because you don’t like what the chaplain says.”

Ultimately, Kohn said that if she was in charge at George Washington University, she probably would not kick the priest out, but she did maintain that the students have a right to a chaplain who’s “not going to call them unnatural and immoral.”

For the record, O’Reilly told his audience that he invited Father Shaffer on the Factor, but he declined to appear. “We hope he changes his mind,” O’Reilly said, “as Jesus would.”