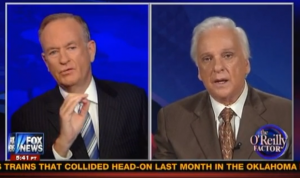 On his show Monday night, Bill O’Reilly and Bernie Goldberg once again took a look at the media and its treatment of President Barack Obama (versus the treatment of Mitt Romney). The tone has shifted, they observed — but concluded that the tide is hardly turning.

O’Reilly and Goldberg started by noting that while the infamous liberal media has generally been pretty soft on the Obama administration, recently the tone hasn’t been quite as rosy. Specifically, Goldberg pointed to instances like critical reaction to the most recent jobs numbers and CNN’s Candy Crowley going after Obama’s anti-Bain Capital attack ad.

Goldberg conceded that he’d foreseen that from time to time, the media would be tough on Obama. But are we seeing what “may be the beginning of historic change” in media treatment? Absolutely not. From there, he cited a laundry list of promises Obama said he’d fulfill in his first term — ranging from jobs to social programs and various aspects of economic recovery. Those are failed promises and the sympathetic media look the other way, Goldberg asserted.

“All politicians make promises and few deliver, to be fair,” O’Reilly responded, playing devil’s advocate. But Goldberg said it’s different: Vague promises like hope and change are not comparable to the very specific ones Obama laid out. If the media can find time to discuss Romney’s high school year’s and Ann Romney’s fondness for dressage, he said, why not find time for this?

“Because they want President Obama to be reelected,” O’Reilly said. “As simple as that.”

It’s not that those in liberal media wake up every morning and say they want to help Obama, Goldberg said, but “they say, ‘I’m not going to report things that might ideology look bad.'”