O’Reilly, Bernie Goldberg Rail Against ‘Collapse Of Family’ Among Blacks 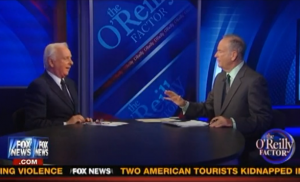 On Monday night, Bill O’Reilly and Bernie Goldberg had a nice little discussion about the African-American community and the “collapse of family.” Largely, the segment consisted of Goldberg railing against the out-of-wedlock birthrate among the black community — and insisting nothing will change for the better until the “fatherlessness” problem is alleviated.

Before civil rights legislation kicked in, said O’Reilly in an older clip he ran during the segment, the black family was more stable. The out-of-wedlock birthrate was significantly lower. “Things have gotten worse as society has gotten more progressive,” he said in the clip.

Back in the studio, Goldberg (repeatedly) deemed the 72.5% out-of-wedlock birthrate “embarrassing.” On that note, O’Reilly added, “In the entire recorded history of the planet, there has never been a greater voluntary abandonment of machine from their children than there is today in black America.” The most important reason behind this is “fatherlessness,” Goldberg said, alluding to a vicious cycle of sorts. “The government became the father,” he said earnest.

The two agreed that leaders would do good to drive home a reality check of sorts in addressing the black community, but realistically said it wouldn’t happen given “white liberal guilt” and not wanting to be accused of being racist. The cops or National Guard can’t solve these societal issues, O’Reilly said. “The African-American community has to come together and demand that it stop.”

O’Reilly later noted that problem isn’t exclusive to blacks. There are “parallels” in white precincts when it comes to boys without fathers, he informed us. (Imagine that!) He went on to give a quick 101 lesson, asserting that “young boys, once they get big enough don’t listen to their mothers.”

Circling back to his main point, Goldberg ended with his central point: “Nothing is going to change in black America for the better as long as you have 72.5 percent of all the babies born with no father around. It isn’t going to change.”