O’Reilly Calls Out Obama’s ‘Mistake’ In Labeling Boston Attack A ‘Tragedy’: ‘This Is What The Nazis Did’ 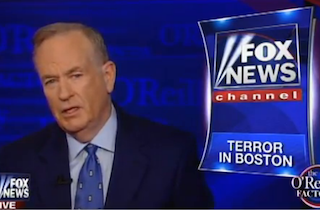 In a special edition of his show, Bill O’Reilly continued Fox News’ coverage of today’s bombing at the Boston Marathon. Going off on the “cowardly attack,” O’Reilly offered a rundown of the facts before condemning the horrific incident. He was joined by Peter King, the Republican congressman from New York.

President Obama promised justice, the host noted, “but he made one mistake.” He “called the attack a tragedy,” O’Reilly said. “It was not. It was a vile act of violence, designed to kill innocent people, including children…This makes me sick.”

King added that “there’s no doubt in my mind that this is a terrorist attack.” While we don’t have all the facts, and officials haven’t said who is responsible for the attack, King said we need to be looking at al Qaeda, or at least an offshoot of the organization.

Furthermore, the incident had the same m.o. as the 9/11 attacks, O’Reilly asserted — as King urged we use the attack as a wake-up to ensure we stay vigilant and aggressive in monitoring threats.

Not wanting to be “quibbling with the commander-in-chief,” O’Reilly later revisited his earlier point about the president’s response to the situation. Obama “did his job today, and I trust that he will get to the bottom of it,” he said. “But it’s not a tragedy. I mean, these are well thought out, military campaigns, directed against civilians. This is what the Nazis did.”

While it’s absolutely a vile attack, as O’Reilly said, it’s strange to say it’s not also a tragedy.

Take a look at the segment below, via Fox News: