O’Reilly Clashes With Beckel Over Moratorium On Muslim Student Visas: It Would Damage U.S. Foreign Relations 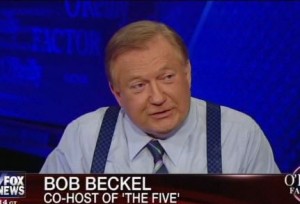 Bob Beckel came under fire this week for calling for a temporary moratorium on allowing Muslim exchange students into the United States. Beckel has repeatedly stood by his statements, and continued to do so on Bill O’Reilly‘s show tonight. O’Reilly was surprised that a big liberal like Beckel would make such a statement, and Beckel told O’Reilly that he’s “taken a beating” from people on his side for his comments. O’Reilly agreed with the spirit of Beckel’s comments, but clashed with him over how such a proposal would affect U.S. foreign relations.

RELATED: Fox’s Beckel Triples Down On Desire To Stop Visas For Muslim Students, Clashes With The Five Co-Hosts

Beckel made it clear that the thousands of Muslims currently in the United States with student visas should stay, but he argued that there are currently pending cases over such visas that the FBI hasn’t gotten around to yet and, in the wake of the Boston Marathon bombing, they should stop new students from coming into the U.S., finish up the cases they have now, and then lift the moratorium again.

O’Reilly found Beckel’s take surprisingly reasonable, but said it would be a bad idea from a public relations standpoint with Muslim-friendly nations. Beckel said he would feel compassion for them were it not for the fact that not a single one of those Muslim leaders ever appropriately decried 9/11. O’Reilly rebutted that point by saying U.S. intelligence gets a lot of information from nations like Saudi Arabia, and no one condemned 9/11 because leaders wanted to avoid civil war. Beckel responded, “That doesn’t interest me, that’s their problem.”

Beckel pushed back against the idea that civil war would have erupted, but O’Reilly predicted radical imams would have been up in arms. What O’Reilly had a bigger issue with was Beckel making the same suggestions for Chinese students because they might hack U.S. cybersecurity. Beckel called China “the biggest threat to the United States,” and declared he has no problem making enemies with them.