O’Reilly Clashes with Dobbs Over Gov’t Shutdown: GOP Will Look Like ‘Party of Anarchy and Chaos’ 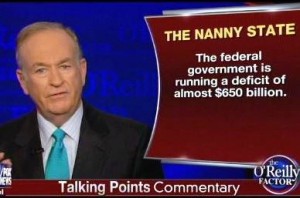 Despite much of the conservative media believing the GOP needs to take a stand with defunding Obamacare, Bill O’Reilly does not believe it will work out well for the Republicans. Unlike Lou Dobbs, who was slightly more optimistic about it, O’Reilly was convinced that if the GOP does not let up, it will damage them and make them look like the “party of anarchy and chaos.”

In his Talking Points Memo, O’Reilly declared, “Obamacare will kick in on October 1st, no matter what.” That wasn’t to say he was happy about it, going through how he believes the new health care law will damage the economy, and said Obama would never change his mind because “liberal ideology is so invested… in taking money away from successful Americans.”

Dobbs argued defunding the law was a worthy fight, and said the ball is now in the Senate’s court to approve the continuing resolution with the Obamacare defunding, otherwise they will be shutting down the government to save the health care law. O’Reilly said the media will spin it differently, arguing the only tactic for the GOP at this point is to “regain power” in the midterms and then go back to this.

When Dobbs expressed confidence in the intelligence of the American people, O’Reilly sighed and said, “I think you’re living in the Land of Oz here.” He predicted the GOP will look like the “party of anarchy and chaos” if they keep pushing for defunding.