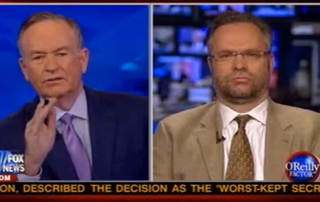 Mideast new network Al Jazeera is preparing to receive accolades from Columbia University for much of its exclusive coverage of the revolts in the region this year, much to Bill O’Reilly‘s chagrin. The Fox News host tonight complained of discomfort to guest [guy] on seeing such a biased network win a journalism award in America, and in the process compared their journalists to organized crime double-agents.

O’Reilly took on this issue with former CIA Middle East specialist Reuel Marc Gerecht, who made the point that Al Jazeera’s coverage was “very first hand” and “dwarfed the reporting coming out of CNN or BBC.” O’Reilly did not deny that the coverage was extensive and unparalleled, but had moral objections to the way the acquired their information. “They have their connections and they’re looked upon as the home team,” O’Reilly argued, suggesting that the only news on non-English Al-Jazeera is “that great Satan America” and “the Arab extremists, they’re really okay.” Then he doubled down on the “connections” bit of the argument:

It’s difficult to gauge which of the groups O’Reilly analogized will be more offended– the anti-American Mideast groups likened to the common American gangster or the patriotic American racketeer likened to the garden variety Hamas member. Either way, O’Reilly’s paradigm stands: delivering news no one else can acquire from questionably legitimate groups by being ideologically or morally aligned with them, to O’Reilly, does not appear award-worthy. “I think that probably pushes it a little too far,” Gerecht replied, suppressing a bit of a cringe, though he did add that he himself would be uncomfortable seeing Al Jazeera win an award for coverage of poverty in America or another topic in which their biases were more open.