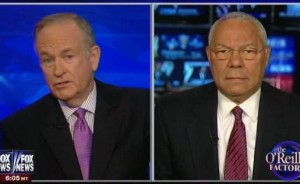 General Colin Powell has been very critical of the Republican party in recent years, and tonight he appeared on Bill O’Reilly‘s show to defend his criticisms of the GOP. O’Reilly grilled Powell on why he continues to support President Obama despite the bad economic numbers and made him defend his claim that the Republican party has a problem with minorities. O’Reilly also brought up a criticism that Powell is just bitter with the party because they made him look bad following his 2003 speech before the United Nations on weapons of mass destruction in Iraq.

RELATED: O’Reilly Blasts Colin Powell’s Accusation Of GOP Racism: He ‘Used To Be A Republican’

Powell explained to O’Reilly that he was put off in 2008 and 2012 by the economic plans proposed by the Republican campaigns. He cited his long history of voting for Republicans and working for Republican presidents to assure O’Reilly of his credentials, before saying that he is “troubled” by the rightward shift of the party and decided Obama was the “best choice” for the presidency.

O’Reilly pointed out that the economy under Obama has not been particularly kind to African-Americans. Powell said that overall the economy has improved, though he acknowledged it was not enough. He criticized the Republican party for not recognizing “fundamental demographic changes” happening in the country, suggesting that if they want to endear themselves to minorities, they cannot keep pushing for immigration and voter ID laws that adversely affect minority groups.

O’Reilly pushed Powell on that last point, asking him what objection he has to voter identification. Powell said he opposes “additional levels” of ID that would disenfranchise many people, while disputing the idea that voter fraud is a widespread problem.

In the second part of the interview, O’Reilly more directly took on Powell over his claim that parts of the Republican party “still look down on minorities.” O’Reilly highlighted Powell’s criticisms of John Sununu and Sarah Palin for, respectively, calling Obama “lazy” and criticizing his “shuck and jive” on Benghazi. Powell clarified that he does not believe Sununu and Palin and racists, but said they used language in a context that would seem racially charged to minorities, calling their remarks two examples of a more widespread “vein of intolerance” in the party.

O’Reilly wrapped the interview by asking Powell a “rude question”: there is some talk amongst Republicans that Powell just resents the GOP because they “made you look bad” following his testimony on WMDs in Iraq. Powell dismissed it as “a bunch of nonsense.”