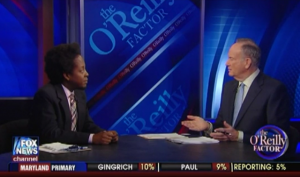 On his show Tuesday night, Bill O’Reilly spoke to Rich Benjamin, who wrote a piece in the New York Times that states George Zimmerman killed Trayvon Martin “in cold blood.” O’Reilly reiterated that he’s been opposed the media convicting Zimmerman, and confronted Benjamin. “You convicted him in print,” he said. “Don’t you see that that is not right?”

AS a black man who has been mugged at gunpoint by a black teenager late at night, I am not naïve: I know firsthand the awkward conundrums surrounding race, fear and crime. Trayvon Martin’s killing at the hands of George Zimmerman baffles this nation. While the youth’s supporters declare in solidarity “We are all Trayvon,” the question is raised, to what extent is the United States also all George Zimmerman?
Under assault, I didn’t dream of harming my teenage assailant, let alone taking his life.

Mr. Zimmerman reacted very differently, taking out his handgun and shooting the youth in cold blood.

O’Reilly asked, “Don’t you have any hesitation? Don’t you see that that is not right?” Benjamin responded:

Well, Bill, for me to write that statement, I tried to put myself in the shoes of Trayvon Martin. Now, you and I are adults. But Trayvon Martin was a 17-year-old. Imagine yourself, you are just talking to your girlfriend, you are on a candy run. Suddenly an adult comes up to you. Now, this adult has no badge, he has no uniform. He could be on drugs for all Trayvon knows — and then suddenly an altercation starts. So the end result of that is that Trayvon unfortunately was murdered in cold blood.

O’Reilly replied: “If you would have written that I wouldn’t have any problem. Okay? Except for the last part murdered in cold blood. You who weren’t there, okay, have just convicted Zimmerman. You weren’t there, you don’t know what happened.”

He added that an investigation is underway and there’s evidence on both sides of the altercation, as well as the added factor of Florida’s Stand Your Ground law. Despite all this, O’Reilly said, “you continue to say murdered cold blood. That’s wrong. That’s just wrong.”

Benjamin argued that had Zimmerman listened to authorities and not chased down Trayvon, the incident may have ended differently. O’Reilly interjected, saying, “Yu can criticize Zimmerman for what’s on the record. I don’t have any problem with that. And I have you cannot convict him as did you in the New York Times of cold blooded murder. That’s morally wrong.”

“The kid was killed in cold blood,” Benjamin said. O’Reilly specified, “He was killed. You said he was murdered.” Benjamin said that meets his definition, but conceded that it’s not a legal definition. O’Reilly said, “purely speculating,” if there was an altercation, then it wasn’t in cold blood. Killing and murder are not the same thing, he said.

“If Zimmerman is found not guilty in the case, are you going to write an op ed apologizing for this?” O’Reilly asked.

“I would consider it, absolutely,” Benjamin replied. “We have to see what the facts are.”

O’Reilly pivoted to Benjamin’s own experience getting mugged, asking him if he’d have shot the man who pointed a gun at him. Benjamin said not unless his life was in danger, to which O’Reilly incredulously replied, “He had a gun on you! What more do you need?” Asked if you should be able to defend yourself that way, Benjamin said it’s different with a teenage assailant. O’Reilly replied, “! don’t care if he is 4 years old. The guy has got a gun on you!” In his place, O’Reilly said, if he had a gun, he’d have used it.