O’Reilly Dissents From Gandolfini Worship: Made Tony Soprano’s Crimes Seem ‘Not All That Bad’
video

O’Reilly Dissents From Gandolfini Worship: Made Tony Soprano’s Crimes Seem ‘Not All That Bad’ 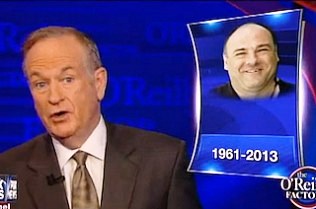 James Gandolfini’s too-soon death yesterday at the age of fifty-one prompted a unanimous, spontaneous, and genuine outpouring of homage.

Unanimous until now. On The Factor Thursday night, Bill O’Reilly wondered if Gandolfini’s sympathetic portrayal of mobster Tony Soprano was too good, in that it legitimized Soprano’s criminal acts for a nation of wannabe-gangstas.

“I believe [Gandolfini] humanized the guy to the point where it might not have been a positive for the country,” O’Reilly said. “Because impressionable people, younger people in particular, look at this guy who murders people and he sells drugs and he does all kinds of terrible things, but you know, he’s really not all that bad.”

Goldberg said there were two minor groups who would want to emulate Soprano: “Real-life gangsters who liked the show, and said, ‘Oh yeah, he is a good guy, I like him, he’s like me.’ And, basically, guys who want to think that they are tough, so they think, ‘Yeah, I want to be like Tony Soprano.’ But in a big country, and show with a big audience, you are going to have losers that think that way. But there’s not a shred of evidence that this affected the culture.”

O’Reilly contrasted Gandolfini’s portrayal of Soprano with Robert De Niro’s Al Capone in The Untouchables. “De Niro made Capone into a monster,” O’Reilly said. “And De Niro is a charmatic actor. But he took a different way with Capone. He could have done it another way, because Capone was charming to a lot of people. But he made him a monster and I admired that portrayal.” (Some would credit over-the-top director Brian De Palma for the De Niro’s “monstrous” portrayal, but hey.)

“You know why Tony Soprano was not that kind of mobster?” Goldberg said. “Because he was vulnerable. He was tortured. He was going to a psychiatrist. He was an empty soul, and there was nothing inside of him. I don’t expect kids to see that and those are the people we’ll have to worry about. Grown ups who paid attention? No. This did not change the culture for the worse. It was a masterpiece.”