O’Reilly: Ex-IRS Official Lerner ‘Not a Patriot,’ Has Something to Hide
video

O’Reilly: Ex-IRS Official Lerner ‘Not a Patriot,’ Has Something to Hide 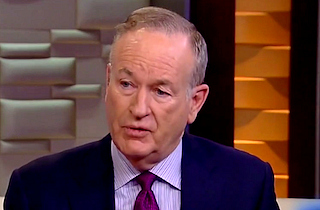 On Wednesday, a House committee voted to refer former Internal Revenue Service official Lois Lerner to a prosecutor due to her role in the scandal involving the targeting of conservative groups. Appearing on Fox & Friends on Monday, Bill O’Reilly said that he would not convict Lerner on television and urged the hosts to focus only on what they know. However, what they know is that Lerner is “not a patriot,” is hiding something, and is harming the country.

O’Reilly was asked about recently released documents which indicate that Lerner joked with her colleagues about getting a job on an offshoot of President Barack Obama’s political campaign.

“I’m not going to convict this woman on television,” O’Reilly replied. “I just don’t know, and I don’t think it’s fair for commentators to do that.”

“What I do know is that the woman knows what happened,” he continued. “So, number one, she’s not a patriot. She’s not doing the country any good.”

He said he was angered by the fact that trained investigators, like Attorney General Eric Holder and the rest of the Justice Department, are not prosecuting Lerner.

“I just don’t want to be in a position of making accusations against Lois Lerner, other than what we know,” O’Reilly concluded. “She’s harming the country. She has something to hide. And so let’s deal with her.”