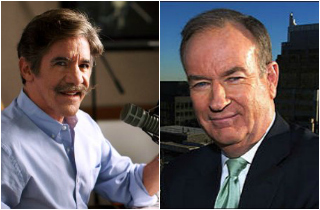 Appearing on Geraldo Rivera‘s radio show Friday afternoon, Bill O’Reilly once again rebuked the conservative talk radio critics of his infamous “Bible thumping” remark, suggesting that Rush Limbaugh, et al, have taken his remarks out of context as a means of “marginalizing” a competitor in the Fox host.

Throughout the interview, Rivera repeatedly pressed his Fox colleague to explain his “feud” with radio hosts like Limbaugh, adding that he agrees with O’Reilly’s belief that arguments will never be won by citing the Bible. The Factor host said “I don’t know what goes on in [Limbaugh’s] mind” when asked to explain why Limbaugh would have made such a big deal out of the comments.

When Rivera suggested perhaps Limbaugh was upset that O’Reilly was marginalizing and perhaps “demeaning” evangelical conservatives who use religion as an important guide for political and moral decisions, O’Reilly responded:

“How can you possibly say that when I’ve been the one who led the whole country into understanding the attacks on Christmas, what was happening in the abortion realm, the importance of Judeo-Christian tradition? How could any fair-minded person say that?”

“The power structure on the left and the right took these remarks… and distorted the point,” he continued. “Why did they do that? I want the folks to know why they did it.”

Teased by the prospect of an explanation, Rivera asked O’Reilly to elaborate. Here’s the Fox host’s assessment:

Listen to the clip below [as edited for time by MofoPolitics]: