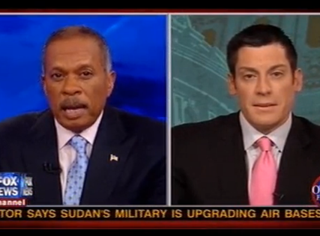 With the increased number of assaults and criminal events being reported at Occupy events across the country, many are beginning to wonder whether the message of being aware of income disparities is being drowned out by people who do not share those core convictions. On The O’Reilly Factor last night, host Juan Williams debated a panel on the merits of the occupying going on, suggesting that maybe “attracting people who are involved in nihilism” wasn’t the best way to spread a political message.

Williams turned to his panel– Democratic strategist Tara Dowdell and Republican strategist Ford O’Connell— for their takes, and Dowdell was adamant in that the message and issue they were attempting to bring to the fore was important enough to pay attention to. “We should not lose sight of the important issues that they’re raising awareness about,” she noted. O’Connell disagreed, arguing that the group had become “a destructive farce with no real end game,” and that the lack of policing was making their point appear less legitimate. Williams agreed– even if the ideas were valid, he asked, “what about the violence?”

Dowdell replied that the people causing problems were the minority– “you have some bad apples… but the overwhelming amount of people are there for the right reason.” She added that “these are city settings so you have people coming to the protests that have nothing to do with the protests.” That latter point was one which O’Connell used to his advantage, asking “is this the best way to make your point about income inequality, by sitting in public spaces and basically causing mayhem?”