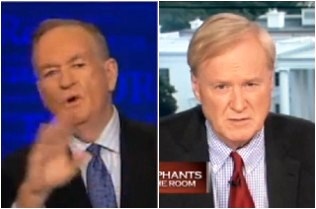 “In the last six months, it’s all fallen apart for MSNBC,” the Factor host said, blaming Matthews’s racially-tinged musings on a need to be more incendiary to boost MSNBC’s woeful ratings. “They’re in a desperate situation right now.”

“As the ratings go down,” Erickson said, “as people are becoming more and more disenchanted with liberalism—it doesn’t relate to people who live within 100 miles of a river valley, only twenty-five miles of a coast—people are tuning out, and they’re becoming more shrill trying to keep the core audience.”

“You’ve gotta be entertaining,” he continued. “Frankly, I don’t know that there is a lot of entertainment on MSNBC or a lot of liberal talk shows. There is a lot of anger there, still, even though they have won and been successful politically.”

“You can’t be narrow and angry,” Erickson said.

O’Reilly compared the exodus from MSNBC to the hermitage of some conservatives following Romney’s defeat, and pointed out that some MSNBC shows are leading off with the weather to avoid covering Obama’s scandals.

“Chris [Matthews] is just unglued these days,” said Tim Graham of the right-wing Media Research Center. “This network now has nothing to do but try to play defense, and some of these shows aren’t even doing that. So you see these shows focusing on topics like pot brownies in Colorado and Wal-Mart shareholder meetings. Look, Tom Cruise showed up! They are not even willing to stand up for Obama because they just have nothing defensible to say.”

“I get a kick out of this because Matthews thinks I’m a far-right fascist,” O’Reilly said. “But the far right guys on the radio are taking me apart every day. I’m confused. I don’t know where I am.”

And O’Reilly’s response, via Fox News: