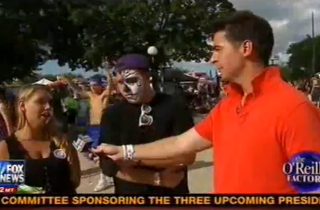 Another day, another Jesse Watters segment of The O’Reilly Factor specially designed to confirm his audience’s preconceived notions about those teenagers and their damn music. The Factor wanted to know why “young Americans still overwhelmingly support President Obama,” and so he sent ambusher-in-chief Watters to the Vans Warped Tour, an annual punk-ish music festival.

Naturally, the selectively edited footage that aired on Wednesday night — replete with the X-treme music and X-treme graphics that kiddies love these days — painted a truly grim picture: kids in goofy hats, skateboard-brand clothing, and face-paint, seemingly unable to answer basic questions about President Obama’s jobs policy or offer any coherent explanation as to why they think the president is cool.

Note to Watters: Going to Warped Tour to find out what young people think of politics is like visiting an assisted living community to find out what old people think of politics — i.e., not exactly the best representation of the people you seek to generalize. Warped Tour’s attendees actually skew really young (the festival includes a parents tent for the chaperoning adults), slightly eccentric, and likely unconcerned with electoral politics.

Watters went to the punk festival dressed like a fratboy (ugh, a bright-red polo with a popped collar) holding a Fox News microphone. Either he thought this would get him “serious” answers because he’s a “well-dressed” “adult,” or, more likely, it would purposely antagonize his teenage interviewees into saying silly things. Asking a question like “What are you trying to prove by dancing in one of those newfangled mosh pits?” is likely to tip your hand.

Frequent Factor guest Bernie Goldberg once said of Watters: “He’s going to come back with certain kinds of information because he knows what the boss likes.” And oh, he does.

Like his other “young people” segments (Columbia University, San Francisco, etc.), Watters spends a lot of time gathering the most horrific answers guaranteed to make the audience gripe about kids these days: One dread-locked teen said “I’m a communist” — gasp! Another said President Obama is “too far right” — Don’t these kids know Obama is a commie? One girl mentioned that President Obama now supports same-sex marriage, “which is amazing” — Ugh, kids and their gay agenda. Most others seemingly had no clue that the election is even a thing that exists.

One ostensibly bright girl said she plans to vote this November, but couldn’t even name the exact date of Election Day! The horror! She guessed that it was November 11th, but no, little girl, it is November 6th. Now go back to Twittering on your Facebooks while listening to the Justin Biebers… and get off my lawn!