O’Reilly Factor’s Watters Takes on Rob Ford: ‘Are You Having Fun Right Now?’ 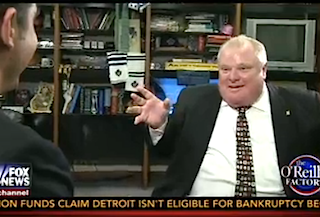 The O’Reilly Factor sent roving correspondent Jesse Watters up to Toronto this week to sit down with Mayor Rob Ford and figure out just what he happening these days with the world’s most famous crack-smoking mayor. “Your behavior’s been a little erratic,” Watters told Ford. “What’s going on?”

Ford said there was nothing unusual about his “party”-oriented behavior and insisted that at this moment in time, “I don’t smoke crack.” Instead of acting contrite, Ford railed against the system that he believes is trying to take him down. “This is the biggest coup you’ve ever seen in North America.”

Asked by Watters if he’s an President Barack Obama supported, as has been suggested, Ford replied, “No, I’m not a lefty, I’m a righty.” Ford, who was clearly having him with the interview, admitted as much when he told Watters asked, “Are you having fun right now?”

“I’m loving it,” Ford said. “My record speaks for itself. I apologize for my mistakes, I’m only human. I can’t change the past, it is what it is.”

To get a different perspective on the Toronto mayor, Watters took to the streets to ask some of the city’s residents what they think of Ford. He came across those who find Ford’s behavior “detrimental” as well as those who think his personal life should have no bearing on his job as the city’s leader. Watters discovered just how common crack cocaine is in Toronto and even found out what some Canadians really think about Bill O’Reilly…