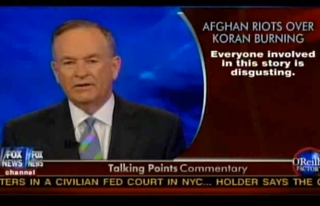 “Everyone involved this story is disgusting”– it’s a line most in the media keep for very particular stories, usually involving John Edwards or a Kardashian sister. Tonight, Bill O’Reilly hauled it out for the peculiarly heinous killings of up to 30 people in Afghanistan, in response to Pastor Terry Jones‘ campaign to burn the Koran last summer. While refusing to take blame away from the killers and Afghan president Hamid Karzai, O’Reilly put the blame squarely in the hands of this “insane Christian.”

O’Reilly was purely revolted throughout his opening “Talking Points Memo” segment today, beginning the week highlighting the horrible deaths of many in Afghanistan after Karzai publicly condemned Pastor Jones in a speech. When the “so-called pastor” burned a Koran recently, O’Reilly noted that “Fox News and most other media ignored it” on account of it being lunacy, and it really wasn’t news until Karzai made a fuss about it. Then he listed the protagonists of the tragedy: “this Terry Jones idiot” who “has blood on his hands,” “Karzai, simply a villain,” and, of course, the media analysts that got it wrong.

O’Reilly refused to make this a free speech issue like many appear to have done so in the week, saying nothing about whether Jones should be allowed to say and do what he does or not– an angle many have taken to avoid linking Jones’ acts with the deadly protests directly responding to those acts. He did play those reactions, however, including Sen. Lindsay Graham‘s rejection of the First Amendment and an MSNBC commentator’s argument for the Bible being less sacred than the Koran, a claim O’Reilly called “ridiculous.” Ultimately, however, O’Reilly returned to Karzai, who “had to know he was whipping up dangerous feelings,” and the Afghan people in general. “How much longer can we try to save the Afghan people from themselves?” O’Reilly asked, concluding his analysis.