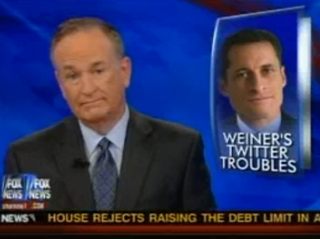 After three days of intense scrutiny, confusion, and still no definitive answers, Bill O’Reilly got to give his take on “Weinergate,” and reserved judgment on Rep. Anthony Weiner, those reporting on the Rep. Weiner, and any other parties involved. Any other parties, that is, except for the FBI. Upon learning that the FBI would neither confirm not deny an investigation into the matter, O’Reilly gave FBI Director Robert Mueller a 24-hour ultimatum to tell the American people what they intend to do about the alleged hacking.

O’Reilly gave attorneys Liz Wiehl and Kimberly Guilfoyle the first shot at commenting on Rep. Weiner’s current situation, both of which replied that they were gravely concerned for the online security of Congressmen. Wiehl noted that she had attempted to reach FBI officials and get a comment on the record about the current state of their potential investigation, but they “would not confirm nor deny” anything. “They certainly can confirm,” O’Reilly countered repeatedly, until Wiehl modified her comment: “they did not confirm nor deny.” “That’s wrong,” an outraged O’Reilly replied. “We pay their salaries.”

Guilfoyle agreed with this sentiment, appearing both upset at the FBI’s silence and saying she was “highly skeptical” of Rep. Weiner’s claims of innocence, noting that hackers rarely let a victim regain control of their account immediately. “I want the FBI to tell the American public what they’re doing,” O’Reilly concluded after they group discussed potential legal action and O’Reilly admitted that he was looking at the story through a strictly legal, and not technological, perspective. Then he issued an ultimatum– until he tapes tomorrow’s show– for a straight answer. “With all due respect, Mr. Mueller, we’re going to want a statement from you.”