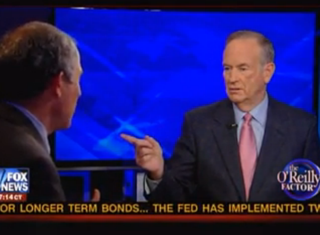 Former Clintonite staple Lanny Davis is taking his civility crusade alongside Michael Steele to The O’Reilly Factor tonight, calling for those who use inflamed rhetoric to tone it down. Bill O’Reilly mostly joked that Davis was “fighting a losing battle,” and upheld as a clear reason why MSNBC host Melissa Harris-Perry‘s comments earlier this week that the War on Terror was “horrific racial violence.”

O’Reilly showed Davis two instances of NBC incivility he thought were proof of the fact that the Davis-Steele project was doomed to fail. First up, Andrea Mitchell selectively editing a video of Mitt Romney talking about the WaWa ordering system, which Davis did not want to blame Mitchell directly for. “I don’t think Andrea Mitchell would do that, I think she was unaware… just knowing her, I can’t believe it, that’s a horrible example of out of context,” Davis argued, which O’Reilly didn’t buy but did note that “she doesn’t going into the editing room and know what her people are doing.” “But this is a pattern– take the material and make the person look as bad as you think you can make them,” O’Reilly countered.

Davis replied once again that he was “fed up, just like Cory Booker” with vicious attacks. “This is like you standing on the beach in Thailand, standing in front of tsunami saying ‘I’m fed up with you, tsunami!'” O’Reilly joked. Davis promised to “be there to find a solution to problems.”

As for Harris-Perry, who had said that Americans had accepted “horrific racial violence in the name of national security,” comment O’Reilly thought were “unbelievable.” “We in the United States are racists because we defended ourselves against radical Islam– you can’t combat that,” O’Reilly argued. He did not succeed in disheartening Davis, who promised to “disagree with people who say things like that,” and promised some more “solutions.”