O’Reilly Goes Off on ‘Racial Agitators’ in Ferguson: This Is ‘Just Bull!’
VIDEO

O’Reilly Goes Off on ‘Racial Agitators’ in Ferguson: This Is ‘Just Bull!’ 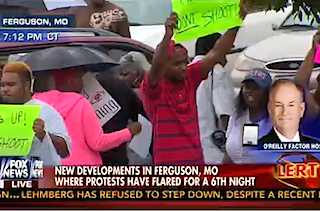 Bill O’Reilly was supposed to be on vacation tonight. But he was apparently so “angry” over the coverage of the situation in Ferguson, Missouri that he decided to call into a special primetime edition of The Five to vent over what he sees as a false narrative being put forth by “racial agitators.”

“I want the Factor audience and everybody else it know that this is just bull, just bull,” O’Reilly said via phone. He condemned people for trying to convey “the truth” of what caused a police officer to shoot and kill 18-year-old unarmed Michael Brown when they have “no blanking idea” what happened.

When Bob Beckel pointed out that the cop did not know Brown was a suspect when he stopped him, O’Reilly brushed that notion aside, saying, “We don’t know what he knew.”

“Now I’m hearing from the National Action Network, which is a despicable organization, that this is a smear that they put out of this video of the victim assaulting a clerk and stealing some stuff in a convenience store,” O’Reilly continued. “There comes a point where we know what your up to,” he said to the “racial agitators” out there.