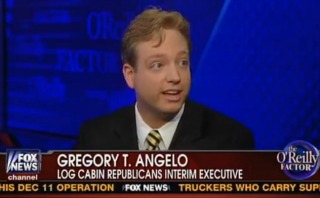 Bill O’Reilly interviewed the interim executive of the Republican gay rights group, Log Cabin Republicans, about their opposition to the nomination of Chuck Hagel to Secretary of Defense Wednesday and grilled Gregory T. Angelo on whether the group’s aversion to Hagel was based solely on the fact that he was opposed to an “openly, aggressively gay” man being a U.S. ambassador. “Does it disqualify a person from holding an important office?” O’Reilly asked. “Is there a litmus test?”

Angelo said the reason the group was opposing Hagel’s nomination in the first place was because they are Republicans and several other Republicans are also opposing Hagel for various reasons. He noted, however, that Hagel needs to be held “accountable” for his record on gay issues.

O’Reilly continued to press him on whether opposition to gay marriage immediately disqualifies someone from holding a public office and Angelo eventually responded, “We don’t have a litmus test in Log Cabin Republicans, no, we do not.”

O’Reilly opined that Hagel’s opposition to James Hormel “doesn’t seem to be unreasonable.” Angelo responded that the group was looking at the “totality” of Hagel’s record on gay rights, not just that one incident.

“I don’t know if this should disqualify him,” O’Reilly said.

“I don’t like his stance on other issues,” he added. “But the gay thing, I don’t know.”