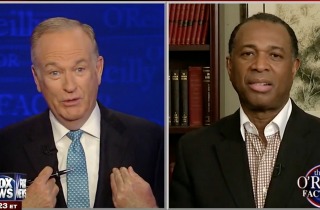 The hosts and guests on Wednesday’s The O’Reilly Factor agreed that the concept of “white privilege” was a historical truth. However, host Bill O’Reilly and Fox Business Network host Stuart Varney battled with Fox analyst and social justice activist Rev. Jacques DeGraffe over whether the efforts by institutions like college campuses were engaging in “divisive” efforts in the attempt to right historical wrongs.

O’Reilly began by asking DeGraffe if he was “privileged,” in spite of his relatively poor upbringing. “Yes,” DeGraffe replied. He clarified, however, that O’Reilly was merely a “beneficiary” of the experience of the privilege of others who share his racial background.

“I think that is accurate,” Varney said when asked if he believed white privilege was real. “White privilege existed in the past.” However, he said that the means by which some have attempted to rectify this condition are “divisive.”

“I don’t think that you right historical wrongs by guilting the present,” Varney said.

“It’s not intended to make anyone feel guilty,” DeGraffe said of Harvard University Kennedy School’s plan to instate a seminar during student orientation that focuses on “checking” white privilege. “Why would you feel guilty if you haven’t done anything wrong?”

“You can’t have a course based on skin color,” O’Reilly objected. “That, in itself, would be inherently racist and they’d be foolish to do it.”