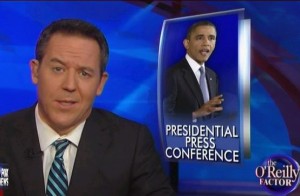 Greg Gutfeld, filling in for Bill O’Reilly tonight, brought up President Obama‘s press conference this week and one reporter in particular who seemed to be fawning over the president. Gutfeld quipped that she acted like “she’s meeting Justin Bieber and brought on his The Five co-host Dana Perino to talking about how cozy the media seems to be with the Obama administration.

Perino said that Obama is just naturally charming, and while “reporters talk a great game” beforehand, when they get into the room with Obama they just start acting star-struck. Gutfeld also pointed to Obama’s defense of U.N. ambassador Susan Rice as an example of the president using “personal faux outrage to blunt criticism.”

Perino wondered why Obama does not hold more press conferences, pointing out that Obama had previously promised to hold one a month. Gutfeld admitted he couldn’t stand any more press conferences, and said that they would be pointless anyway since the “media’s love for him has blunted the ability to report objectively” on Benghazi. Perino cited the Watergate investigation as an example of journalists doing their job looking into a presidential administration.

Gutfeld and Perino suspected that news editors might be pressuring reporters to kill stories unfavorable to the Obama administration. Gutfeld suspected that the press might be on to something with investigating into the Benghazi scandal because now the rae card has been played.