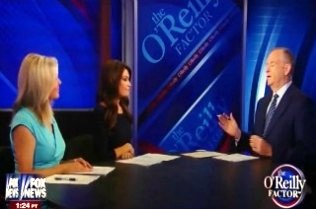 For the better part of 16 months, NBC News and thier 24-hour cable new broadcaster, MSNBC, have hyped the story of the complicated killing of Trayvon Martin by the careless – but not criminally reckless – George Zimmerman. In the course of that trial, NBC News and MSNBC’s hosts and contributors did everything in their power to foster the impression that Zimmerman shot Martin because of his latent racial animus. Last year, the network inspired Zimmerman to sue NBC News for defamation after they broadcast a version of the call he made to 911 which was edited to suggest that he offered up Martin’s race unprompted. He did not.

Now, with the criminal trial over and Zimmerman cleared of all charges, and with MSNBC’s host continuing to insist that Zimmerman has somehow evaded justice, the defamation suit against NBC News will move forward. A legal panel on Fox News Channel’s O’Reilly Factor on Tuesday night could hardly contain their understandable smugness over the karmic justice intrinsic in the fact that George Zimmerman – a man NBC tried to transform into a cartoon villain for the sake of their ratings – may end up costing the network “millions.”

On Tuesday, Bill O’Reilly asked his panel guests, Fox News Channel analyst Lis Wiehl and The Five co-host Kimberly Guilfoyle, whether NBC News could successfully defend their organization from the charge that they defamed Zimmerman by noting that the staffers who edited the 911 call were identified and disciplined.

Nope, Wiehl replied. “NBC Is on the hook here for a big defamation, intentional infliction with emotional stress lawsuit here,” she said. “It started the whole narrative of Zimmerman being this hardened racist, this profiling racist that started everything.”

“They’re looking at countless amount of money, probably millions of dollars,” Wiehl said of the damages that NBC may be forced to compensate Zimmerman for. She said that, at the time of the infraction, Zimmerman was a private figure who had not been charged with a crime.

Guilfoyle observed that NBC’s best defense in this case is to show that Zimmerman would inevitably have become a public figure even if he was not at the time of the infraction. The fact of Zimmerman’s innocence complicates even this defense.

The guests agreed that, even if Zimmerman is found guilty in a civil suit the Martin family is expected to bring, NBC News may still be unable to defend against the charge that they defamed the former criminal defendant.

Meanwhile, the drumbeat continues. This weekend, MSNBC host Al Sharpton will lead a 100-city rally to lead a call for “Justice for Trayvon.” To what end, only he and his producers know.

In a cosmic way, it is fitting that Zimmerman – a man that NBC News executives surely had hoped would revive their cable network’s sagging ratings when they decided to go wall-to-wall with coverage of his case and eventual trial – may end up costing the network much, much more than he ever delivered for them.