O’Reilly: If Sandra Fluke Wants Gov’t To Cover Female ‘Activities,’ ‘Male Activities’ Should Be Covered Too 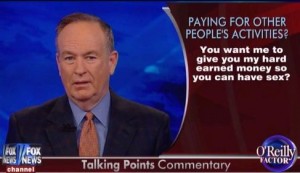 Sandra Fluke has evolved overnight from the woman who testified on the issue of contraception to the face of women’s health care, especially in the wake of Rush Limbaugh‘s controversial statement where he called the Georgetown law student a “slut.” Bill O’Reilly took issue with the notion of the government paying for her “activities,” and said if the activities of women are paid for, what about men’s activities like football or going to public gymnasiums?

O’Reilly summed up Fluke’s testimony as her wanting taxpayers to give their “hard earned money so you can have sex.” He argued that including contraception in one’s health plan tacks a small fee onto premiums, noting the failed Blunt amendment yesterday. But O’Reilly seemed focused on the idea that Fluke’s hidden agenda was to get people to pay for her “activities.”

O’Reilly made an interesting contrast, asking why exactly the government is only paying for the activities of a certain gender.

“So why, then, won’t the government pay for my activities? For example, I played college football. The government should have bought my equipment. My helmet, shoulder pads, cleats, because if I don’t have those things on the field, I might get hurt. And that might cost society a lot, especially if I don’t have the money to pay for my hospital stay. So surely the taxpayers should have ponied up for my football activities.”

One important difference, though: only a few select people play football. Everyone has sex. But I digress. O’Reilly said he has no problem with what Fluke does behind closed doors, he just doesn’t want to pay for it. He argued, “there are health implications for everything we do, including eating a burger.” Again, small difference between eating burgers and having sex, but no matter.

O’Reilly framed the views of Fluke and others as seeing sex as a “potential health crisis” that needs to be treated. But then he shot down the idea that this debate has anything to do with women’s health, insisting the focus was on personal and religious freedom, and making sure the government does not infringe upon said freedoms.

Many liberal activists and female politicians, like Senator Barbara Boxer, have suggested that there has been an inherent gender bias in this debate, since no one is making men’s access to Viagra an issue. O’Reilly disputed that line of thinking, and while he completely agrees that women should be given insurance coverage if there is something physically wrong with them, he thinks the government should apply this rule consistently and take care of men’s activities, including the previously-mentioned football funds. What else should the government cover for health care purposes?

“Men need to be physically in shape, so why don’t we pick up gym memberships? That’s a health issue, right?”

And yes, in case you were wondering, there is a difference between a gym membership and sex.