O’Reilly Interviews Oliver Stone’s Son About His Conversion To Islam, Hanging Out With Ahmadinejad
Video

O’Reilly Interviews Oliver Stone’s Son About His Conversion To Islam, Hanging Out With Ahmadinejad 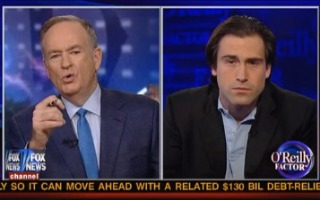 On Monday, Fox News’ Bill O’Reilly invited Sean Stone — son of fellow filmmaker Oliver Stone — to the show to discuss his recent conversion to Islam… specifically his decision to convert in Iran.

Stone explained that “convert” is an interesting word to use in his case, because he doesn’t believe one is converting when worshiping the same God as before. “I’ve always believed in the same Judeo-Christian God,” he clarified, “and it’s a misunderstanding of Islam to say Allah is a different god.” So he didn’t convert Islam so much as “accepted” a new religion.

He adds that, when speaking to people in Iran (including the country’s highly controversial president, Mahmoud Ahmadinejad), he would tell them to, basically, cut it out with “this ‘down with America’ nonsense.”

O’Reilly said he doesn’t have an issue with Stone’s faith or even his time in Iran, but, rather, with his decision to hang out with a political leader who is, in no uncertain terms, an extremist. The host even compared Stone’s visit to taking a trip to Nazi Germany and hanging out with Hitler. Besides, he pointed out, here you are meeting with a man who has denied the Holocaust when your own father is Jewish.

Stone attempted to explain Ahmadinejad’s views regarding Israel and, indeed, the Holocaust, while making sure to add that “there’s no room for Holocaust denial, of course.” But the bigger point, he added, is that dialogue needs to be opened up within the Middle East. (Although, as O’Reilly pointed out, maybe sending, say, former president Jimmy Carter to the region is noooot the best idea.)

“You ok with Iran having a nuclear weapon?” asked O’Reilly, not one to beat around the bush.

“I am,” Stone replied. “Because it’s a republic and there are factions… it’s very much like this country, there’s a lot of unrest inside that country from the economic point of view.”