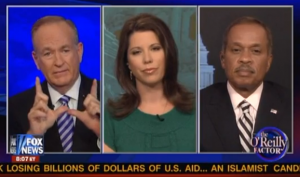 On his show Monday night, Bill O’Reilly kicked off the hour devoting his Talking Points Commentary and a heated panel to President Obama‘s recent change in policy regarding young undocumented immigrants. Taking issue with the president’s one-man method, O’Reilly deemed the move “flat out unconstitutional,” clashing with Juan Williams who decried Republican obstructionism.

Citing Obama’s oath of office, O’Reilly asked Williams whether Obama is upholding the immigration law, incredulously responding to Williams’ assertion that he is. A passionate O’Reilly found an ally in Mary Katharine Ham, who said Obama, a few months ago, said he didn’t have the authority to push through such policy by himself. Asked about specifics, Ham promised to come back with the clip of the president saying so — before going on to argue that President George W. Bush suffered “the slings and arrows” of bringing Social Security reform, and no one on the other side of the aisle credits him.

O’Reilly noted that carving out special status for the group of people getting immunity under Obama’s policy is something the three of them are in favor of. It’s “compassionate” and “fair.” And what’s Obama doing? He’s taking “a noble thing” and “brings it into a realm of illegality. And that, to me, is wrong.”

Williams argued that Obama did bring it to Congress, but the Republicans firmly obstructed his efforts — to which O’Reilly responded, the DREAM Act was full of “other stuff.” Just because you can’t get through Congress, he said, doesn’t mean you “usurp the power.”

He further argued that despite Obama’s and Sen. Marco Rubio‘s similarities in approaches to immigration, the president wouldn’t work with him “because then he doesn’t get the Hispanic vote that he is after by” making this announcement.