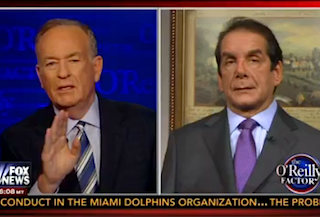 During a segment about this week’s elections and the rest of President Obama’s term in office, Bill O’Reilly put forward a theory as to why Fox News’ cable competitors have struggled to keep up in the ratings, especially during this past month’s rocky rollout of the Affordable Care Act. Without naming names, O’Reilly said anyone who’s “apologizing for President Obama and Obamacare, their ratings are falling at an astounding rate.”

The segment began with O’Reilly’s guest Charles Krauthammer predicting that because the president doesn’t need to run again, he’s unlikely to change his approach to governing over the next few years. “He will stay there. He will hang in there. He will pretend it’s all going well,” Krauthammer said, warning against an “uprising” from Democrats who may decide to break away from a “lame duck” like Obama.

O’Reilly tied to idea of Democrats abandoning Obama to something “very fascinating” happening in the media. “Those media people on television who are apologizing for President Obama and Obamacare, their ratings are falling at an astounding rate,” O’Reilly said. “Nobody’s buying the apology and the BS and the spin anymore.”

Krauthammer pointed out that “it’s not only their ratings, it’s their reputation,” to which O’Reilly said some of them “never had a reputation and you know who I’m talking about.”

“Some of them started out with one,” Krauthammer replied, before adding a not-so-subtle reference to MSNBC’s Chris Matthews. “But then you know they got a lot of thrills up a lot of legs and it’s been a problem ever since.”