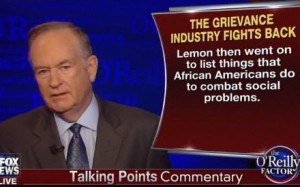 Bill O’Reilly opened his Monday night show singling out anchors on his two cable network competitors for remarks they made over his controversial comments on race. Over at MSNBC, Al Sharpton mercilessly attacked O’Reilly for his lecturing of the black community, and O’Reilly delivered a fiery response. But O’Reilly had much kinder words for CNN rival Don Lemon, who got widely slammed for agreeing with O’Reilly, calling Lemon “honest” and “courageous.”

O’Reilly called on “civil rights folks to stop maligning the country and face up to a huge problem that is directly harming millions, primarily, in the African American community.” He continued to blame these problems mainly on the collapse of the traditional black family unit, saying that the civil rights industry ignores it, along with an entertainment industry that embraces “gangster culture.”

O’Reilly then turned to Sharpton, who he said “attacked the messenger, implying that I am a racist.” In response to Sharpton playing O’Reilly’s infamous “motherfucking iced tea” moment, O’Reilly accused him of taking it out of context, declaring that Sharpton and other TV pundits are “attacking me because I am a threat to them.”

O’Reilly declared, “The day of the race hustlers is coming to an end.” He said people like Sharpton aren’t interested in solving the real problems of the black community, leaving it to “honest, courageous people” like Lemon. O’Reilly had nothing but laudatory words for the CNN anchor.

“Lemon was predictably attacked by the race hustlers, but his courage stands in stark contrast to their ignorance and corruption.”

And as for Sharpton, O’Reilly ended with a message to him: “Your day is done.”