O’Reilly On Interviewing: ‘Interviewers Who Want Answers Must Interrupt’ 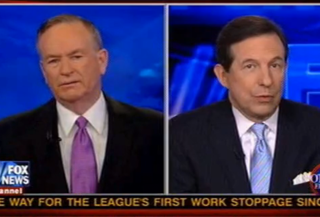 Bill O’Reilly has what one would, generously, call a combative interviewing style. He gets straight to the point and refuses to waste time on answers that don’t directly refer to his question. And he owns this with pride, calling out the “left wing loons” on Friday that criticized him for interrupting President Obama during his Superbowl interview, and expressing frustration at how hard it is to get Sarah Palin to give a straight answer.

“TV interviewers who want answers must– must– interrupt their guests,” O’Reilly argued, welcoming guest and fellow interviewer Chris Wallace to talk about their interview style. But before giving Wallace the word, O’Reilly took a moment or two to address the art of conversing with Sarah Palin. “I don’t want to have to interrupt Sarah Palin or Barack Obama or anything. I asked Sarah Palin a direct question,” he noted. “She didn’t answer.” Not only did she not answer, O’Reilly continued, “the governor wanted to give a speech she has given literally fifty times before.”

With that off his chest, Wallace got his turn, agreeing that the dynamic with a political interviewee is often that “they view your question as a departure to the answer” they have been trained to give. When they are forced to leave their talking points, he continued, it makes for a far more fascinating interview. On this point, both Wallace and O’Reilly agreed, though Wallace believed there was a serious political element to how the audience reacts to an interview. “If you’re interrupting someone they don’t like,” he posited, “they’re all for it. If you’re interrupting someone they like, they get ticked off at you.” O’Reilly seemed skeptical that it was so purely political though, and reiterated that he didn’t “want my time wasted on propaganda.”