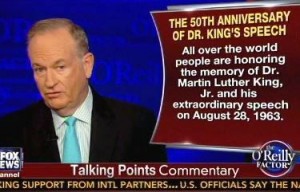 Bill O’Reilly mostly found the speeches commemorating the 50th anniversary of the March on Washington to be “uplifting” and inspiring, and even credited President Obama for his message about the past mistakes of the civil rights movement, but he didn’t like the omission of black Republicans and conservatives from the stage and said there was too much “grievance-mongering” that O’Reilly said does nothing to help advance the civil rights movement.

O’Reilly tackled Obama’s message of economic inequality, arguing that financial conditions for middle-class Americans have not gotten better because of Obama’s own failures and O’Reilly’s assessment that the “skill level of many Americans is declining.” He claimed the private sectors actively wants and recruits minority workers, “but they have to perform.”

He touted the immense racial progress the U.S. has made in 50 years, saying there is “little institutional bias” anymore and bigotry is generally found on an individual level, and “nothing can ever wipe that out entirely.”‘

O’Reilly did credit Obama for “enter[ing] the world of reality” with his comments about the civil rights movement losing its way with “self-defeating riots” and “excuse-making for criminal behavior.” But O’Reilly still charged that Obama and many civil rights leaders prefer government “paternalism” to “self-reliance and hard work,” and that’s a problem.