O’Reilly On Occupy Wall Street: These Are Loons. These Are Anarchists. You Know, ‘Burn Down The Store’ 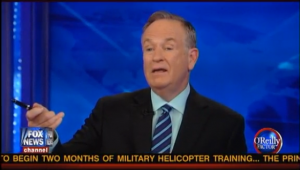 On The Factor Thursday evening, Bill O’Reilly looked into the “rowdiness,” if one may be permitted to paraphrase him, that occurred Wednesday night during the Occupy Wall Street live-in taking place in lower Manhattan. And, quite honestly, I don’t think I’ve ever witnessed the host of an opinion news program have more fun with a story than O’Reilly did with this. The man was in top form, churning out sound bites faster than Lawrence O’Donnell can issue a smirk.

If you’ve been following the demonstration’s progress on Twitter, you may have noticed several participants and witnesses Tweeting about arrests and instances of alleged police brutality.

Here’s how O’Reilly described what happened:

It got really rowdy on the streets of New York City last night as hundreds of far-left demonstrators roamed around, causing a considerable amount of trouble. At least 28 people were arrested as things became confrontational.

After this, O’Reilly ran footage of an officer beating at several cowering people with his nightstick, as well as video of a demonstrator with an accent I really, really like saying some things I really, really hated to a Jewish man who had told him to “get a job.” Also, someone talking about 9/11, for some reason. Confrontations!

He brought on fellow Fox News personalities Gretchen Carlson and Margaret Hoover to discuss things further. But, first: “You weren’t dressed like that, were you?” O’Reilly asked, pointing to Hoover’s smart red suit as well as her, I suppose, notable lack of Phish t-shirts and clothing made of hemp.

O’Reilly then offered another quote worthy of being stitched onto a sampler and hung over your fireplace:

See, my hypothesis — and you correct me if I’m wrong — is this didn’t have much to do with economics. This is about “We don’t like America, we don’t like anything about it, we’re far-left loons and, you know, whatever our beef is, we’re going to take to the streets.”

Hoover agreed, noting that she had interviewed former hippies and at least one communist while witnessing the demonstration firsthand, incognito in an overcoat. “Funded by George Soros,” O’Reilly added. I need that on a t-shirt immediately.

Number one, the numbers are very small here. They’ve been roaming around this city for about a month now, and maybe they get a couple of thousand people. In New York, you can… The Black-Eyed Peas got thirty thousand people up there in Central Park the other night, ok? So this isn’t something that’s big.

These are loons. These are anarchists. You know, “Burn down the stores.”

And that is the entitlement that we are seeing among many in the far left. “You owe it to me.” I mean, I don’t know about you two — you’re pretty glamorous people — I drove a cab in Miami in the summer.

Is anyone else getting the impression that O’Reilly is having a LOT of fun right now? (And seriously, if you can get any of these quotes on a sampler or a T-shirt, I would love it.)