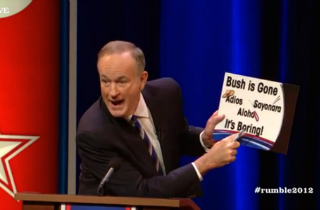 O’Reilly started his speech by correcting Mitt Romney‘s “47 percent” remarks about people who are “dependent on government,” noting that the figure is about half of that.

“About 20 percent of us are slackers,” he said. “It’s a growing industry. And that is what the election is all about…. We are spending an enormous amount of money on 20 percent who, for whatever reason, ‘Eh, we’re just not going to cut it. We’re not going to make a living. We’re not really going to do anything. We want our stuff!'”

Taking a page out of some of his Fox News colleagues’ handbooks, O’Reilly then used a small poster board to emphasize his phrase that the resultant “DEBT IS BAD.” He then went on to criticize the president for being the “biggest-spending president in history” and for blaming his predecessor Bush for creating the spending problem.

“Bush is gone. Adios, sayonara, aloha. It’s boring” he shouted while holding up another poster. “He’s gone. Outta there! It may have been Bush’s fault for the first year, maybe two, but not three-and-a-half.”

He then tore into the “poster person for this entitlement society” Georgetown University law student Sandra Fluke who famously testified before Congress that her employer’s health insurance should cover her contraceptive costs.

“I left two tickets for Sandra, plus a month’s supply of birth control pills, at will-call,” O’Reilly joked before pulling out another poster board that read: “BUY YOUR OWN!”

“We shouldn’t be paying for this. Or a lot of other stuff. That’s why we owe $16 trillion,” he concluded.