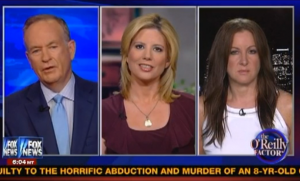 On his show Thursday night, Bill O’Reilly and his panel tackled the issue of welfare programs and whether we’re living in an entitlement state. The discussion quickly grew heated as they debated the merits of such a society and who’s to blame for where we are now.

Kirsten Powers argued that it’s not a question of whether we live in an entitlement state, because we do and have been for a long time. Rather, it’s whether you think that’s a good thing, “whether or not you think the government should be providing these services or not.” She then disagreed with O’Reilly placing much blame on President Barack Obama, arguing that there’s only been a 3-percent increase of the use rate of welfare since Obama took office.

Agreeing with her, Leslie Marshall said it’s not specifically this president’s fault because it’s not a change that took place within the past few years. Whether an entitlement society is a good thing depends on where you’re coming from, Powers added, noting that she thinks it’s a good thing for the government to provide the services.

O’Reilly then challenged the panel’s assertions, asking whether the one-third of Americans who receive some form of welfare support are really in “dire straits.” Powers and Marshall are painting a picture in which one-third of the population is “destitute” and needs the government to rescue them, he said. Powers countered saying that O’Reilly’s picture is one of “people sitting around eating bonbons all day,” when in fact people on welfare have jobs.

In response, O’Reilly pointed to the “dramatic rise” of people on welfare. That in turn led to Marshall noting that some people are “bulking the system,” which was one point O’Reilly agreed with.