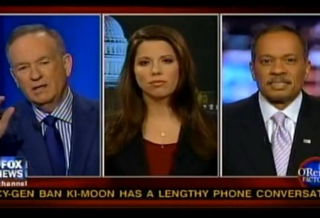 The turmoil in Wisconsin is beginning to serve as a media bias litmus test as coverage continues, and today Bill O’Reilly welcomed Mary Katharine Ham and Juan Williams to look back on reporting so far. They took a look at two reports that first appeared on our pages yesterday: Fox News condemning doctors handing out sick notes at protests as “fraud” and CNN describing the same as “helping out” (we’re still waiting for the hat tip).

O’Reilly placed most of his concern on CNN, though given the difference he made sure to highlight that he believed Fox News’ coverage was fair. Pointing out that Fox News’ Gregg Jarrett was “a lawyer” and thus had enough background to evaluate the legality of handing out the forms, O’Reilly asked Williams for his assessment, who also added that “the fact is, that’s outright fraud.” Calling it akin to “writing up a prescription to support someone’s right to party,” Williams argued that the more salient question was what CNN was trying to do by taking a side. He ultimately argued that they were “just pandering” to union types, perhaps in the hope of higher ratings. O’Reilly agreed that “they didn’t distort the story per se,” but that their sympathies were problematic.

Ham was not so easy on CNN. “I’m not surprised,” she noted, arguing that the coverage was not shocking compared to the way Tea Party protesters had been portrayed. “If you are on the left,” she argued, the portrayal would be “sweetness and light,” but “if you are on the right, you will be a racist mob bent on fomenting violence and revolt.”